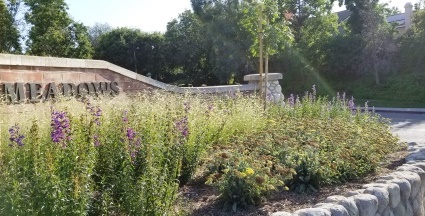 The City of Moorpark is committed to maintaining the natural beauty of its public spaces through sustainable landscape design that conserves natural resources.  The latest example is the landscape renovation project on Tierra Rejada Road between Spring Road and Los Angeles Avenue.

Check out the Before and After Gallery for images of how this project improved the view along Tierra Rejada Road.

When the original landscape concept for Tierra Rejada Road was developed over 30 years ago, it envisioned a woodland meadow, with large evergreens, deciduous shade trees and green meadows. While this vision created an enjoyable streetscape, it also resulted in a landscape that demanded high water usage and was incompatible with site conditions in some areas. In recent years the landscaping along this corridor started showing its age, with several tree species in decline and many areas in need of renovation.

A new landscape design for the renovation of Tierra Rejada Road was developed in 2016.  This new landscaping includes a varied mix of California native and drought tolerant plant species that are adapted to the soils and climate of Moorpark. To further reduce water use, and enhance the long-term viability of the streetscape, water saving technologies such as point irrigation and drip irrigation systems are incorporated in the design. 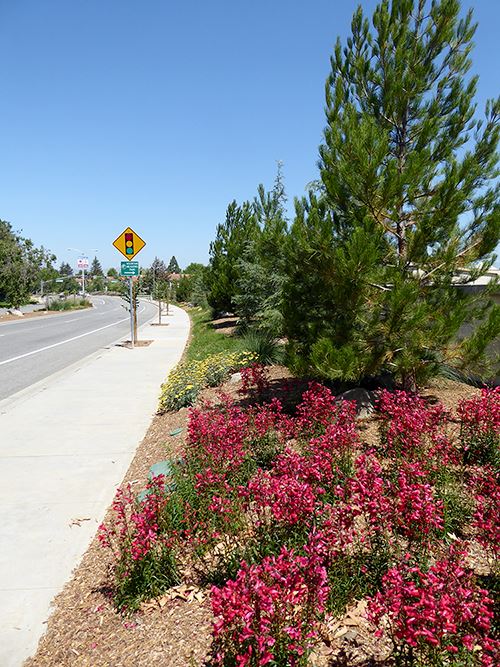 The third phase of the Tierra Rejada streetscape revitalization began in December of 2018 to install the new landscaping and waterwise irrigation system in the parkways and center median islands on Tierra Rejada Road between Spring Road and Arroyo Simi.  Work on this phase concluded in April of 2019.

The last phase of this project extended the new drought-tolerant landscaping and waterwise irrigation system to the three center median islands north of Arroyo Simi.  Due to the proximity of this project area to Los Angeles Avenue (SR 118), progress was delayed while the proper CalTrans permits were acquired.  Work on this phase began in September 2019 and was completed in early October 2019.  The work in this area included removal of five pine trees (three diseased trees and two trees causing irreversible street damage).  Approximately 20 new drought tolerant trees were planted, as well as various native and drought tolerant plants – all supported by new waterwise irrigation.

The completed project updates the Tierra Rejada corridor with a beautiful, sustainable landscape design that complements the mountain and foothill regions of southern California, while requiring up to 50% less water for irrigation.  See the Before and After Gallery below.

Before and After Gallery