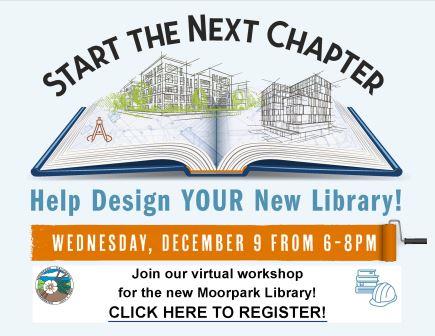 Recognizing that the needs of the community have outgrown the capabilities of the City’s public library, the City has embarked on a project to construct a new, modern library to serve our residents. In 2016, the Moorpark City Council selected a site for the library on the north side of High Street, across from the Post Office, and authorized staff to move forward with the design of a new 18,000 sq. ft. City library. The site was selected not only to support the ongoing development of Moorpark’s downtown area, but also due to its proximity to several neighborhood schools. The following year a library consultant was hired to assist staff with community engagement, planning, programming, architecture review and consultation to ensure that the ultimate layout and function of the library will meet the City’s and community’s needs.

In the Summer of 2020 the City Council approved a conceptual design for a Civic Center Master Plan, which incorporates not only the new library, but also a new City Hall development north of the new library site. This master plan concept creates a strong civic anchor to the High Street corridor, allows for the continuation of commercial uses down the extended portion of High Street, and provides flexibility for future re-use of the existing Civic Center properties. Initially, however, the City’s focus is on the construction of the new library. Work on designing the new library is now underway, and library and City staff are excited to move one step closer to a new modern library for Moorpark and its residents.

The next step is finalizing the schemes to begin the design of the new library. To collect community input, an online community meeting is planned for Wednesday, December 9th from 6 – 8 p.m.

The Community Meeting will include updates on the development process and allow participants to provide their input on various areas in the new Moorpark City Library. Workshop capacity is limited, so sign up early and help design YOUR New Library!